Expectations were high and have 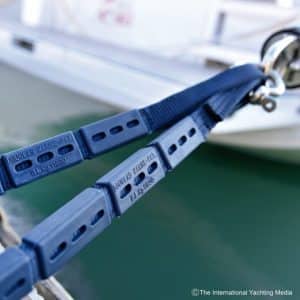 been confirmed by the excellent functioning and low wear we have observed after almost a year of testing.

Last November, we installed Douglas Marine’s MASTER MOORING springs together with Mooring Belts (also manufactured by Douglas Marine) on our lab-boat to test the entire line during the winter period.

Leaving the boat at the mooring is always a cause for anxiety and fear as weather conditions have worsened in recent years and weather events have become unpredictable and much stronger than in the past.

Without forgetting that boat owners are responsible for their own mooring and for any damage caused to third parties.

The MASTER MOORING Series junior mooring shock absorbers and Mooring Belts (which are slowly replacing the chains due to their lower weight and higher breaking load), have worked properly in recent months.

We have found that their use has made it possible to avoid excessive stress in the vicinity of the bollards, where gelcoat webs are usually created, and to contain annoying pitching and rolling.

During the days when the sea was rough and the wind was strong, creating undertow in the harbour, we went to see the performance of our mooring line and realized how much the movement of our boat changed compared to a normal line on land.

After 10 months of testing, Douglas Marine’s shock absorbers show no signs of wear and their steel is still perfect, thanks in part to the choice of materials that is made by selecting only local suppliers.

Douglas Marine mooring shock absorbers in short, are high quality products that ensure great durability and a more ‘ relaxed life on board when in port. 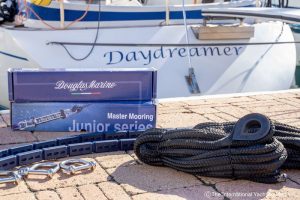 Today, the company is a world leader in the production of mooring devices with a range of mooring shock absorbers for boats from 1 to 900 tonnes, as well as being one of Europe’s leading manufacturers of stainless steel anchor couplings and fender profiles.