A year has already passed since I wrote about the Epropulsion Spirit 1.0 Evo, the amazing Epropulsion electric outboard that now travels with our lab-boat around Italy, and of which I admit, I am very proud. But here I am again, with the feeling that collecting my memories is very light on me.

Yes, because the satisfactions that it has given us this year too have been many, showing all its usefulness in many situations: what’s more, the fact of combining the silence of the sailing boat, which is clearly unequalled in terms of environmental sustainability, with the total absence of emissions that the use of the Epropulsion Spirit 1.0 Evo electric outboard guarantees for our tender, really appeals to me.

But let us make a brief summary to understand what we are talking about. This outboard, imported in Italy by Selva, is an electric outboard installed on our tender, an indestructible Selva 320 VIB. It is therefore a sort of link between us and the mainland that cannot be allowed to slip, because being halfway between the coast and the boat is never pleasant. Especially in loafers and a shirt before disembarking for dinner. Has this ever happened to you?

Do you remember the features of our Epropulsion electric outboard? 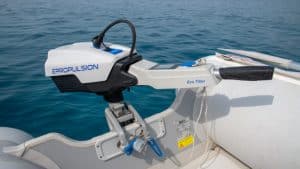 By dint of using it, I am no longer surprised. After our “1,000-mile cruise in the Tyrrhenian Sea” two years ago, and the more than 900 miles sailed this year, it is now part of our family, but it does surprise those who visit us for the first time and have never seen it before.

Let’s start with the dimensions, smaller than those of a classic tender outboard, and with a weight per single component of less than 12 kg, which makes assembly and disassembly really quick and effortless.  In fact, Epropulsion is installed in stages, first the shaft complete with tiller (11.3 kg) and then the battery (8.7 kg), a system that is light and extremely safe at the same time. 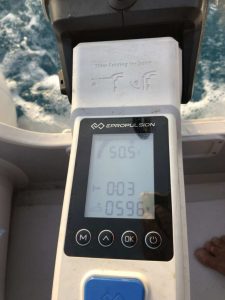 do not think that this is at the expense of materials. In fact, we have put a lot of strain on it this year, sometimes purposely causing it to take a few too many hits, other times in a less intentional manner, but it has held up to it all.

You know, between filming, drones flying, cameras passing by and a boat to steer, it happens that something has to be ‘thrown in there’ every now and then, if you like.

But that’s the point of our tests, to live as if we were in normalcy and a few jolts are part of the game: in any case, compared to last year, the performance remained the same, still outstanding.

Its display continued to work excellently, showing us, as always, some fundamental data such as the indication of charging volts, maximum voltage and, of course, the residual charge: this engine has a 1276 Wh battery, built according to the latest lithium polymer technology, which takes 8.5 hours to fully charge, although in normal everyday use it takes just over an hour to bring the charge back to full after use.

The EPropulsion electric outboard has a secret 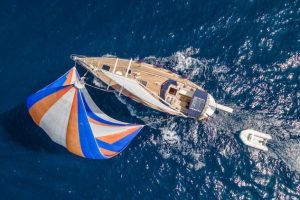 But all this for me, although remarkable, fades into the background in my test because if you remember correctly, the Epropulsion Spirit 1.0 Evo electric outboard has a secret: and what a secret! It recharges itself. Yes, just leave it connected to the tender of the main boat by towing it into the water and it recharges, with minimal impact on sailing speed. In fact, its energy hydrogeneration system, through the flow of water pushing the propeller blades, turns the engine producing energy that recharges the batteries. Game, match, encounter.

This could be enough for me. Silence, because in operation despite the extra year it continues to be very quiet, and free clean energy with the guarantee of never running out of power. Need anything else? 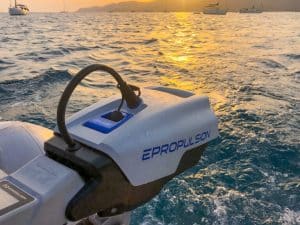 For example, how much energy does it consume? How far can I really go and at what speed? For all the details of the test I refer you to the table below which, you will notice, is the same as last year’s because the performance has remained unchanged, but to give you a concrete example of its hydrogen-generating capacity, we measured about 1 notch of recharge per hour/hour and a half of sailing at 6 knots. Which basically means that in an entire season we never recharged it using the charger!

During this second year of testing, we have never run out of battery power, despite the fact that very often there were four of us on board, engaged in coastal sailing and the classic comings and goings from boat to shore, even over long distances. Like for example in August when, anchored in Cala Brandinchi, we sailed twice to the Puntaldia marina.

Two hours of sailing, without the slightest problem and, above all, with a good charge still remaining at the end of the operation.

EPropulsion Spirit 1.0 Evo – Conclusions on the second year of testing

EPropulsion Spirit 1.0 Evo is the electric outboard I can no longer do without. Is that enough for you? I’m not exaggerating, because this small engine is not only practical, efficient and quiet, it also marks a turning point. It has something special just in its concept, it makes you realize that it is possible to go to sea using only clean energy, and somehow reconnects me to my favourite element, which on the other hand certainly thanks all those who make such a choice: environmentally friendly and absolutely performing at the same time.