Hanse Yachts, the world-famous shipyard founded in 1990 and headquartered in Greifswald, Germany, met with considerable success during the Cannes Yachting Festival 2022, where it presented two world premieres: Fjord 53 XL and Sealine S390. Hanse Group owns no less than six brands, all of which are well-known: Delher, Moody, Fjord, Sealine and Rick Yachts, plus of course its own brand, Hanse Yacht AG. 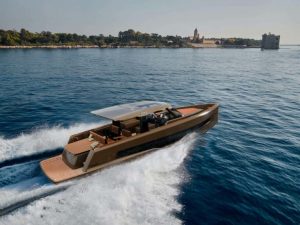 After the success of the 41 XL with more than 100 units sold in one year, the Norwegian-inspired brand is riding the wave of success by presenting the new flagship of the Hanse-owned brand, the Fjord 53 XL, a powerboat that refines the popular elements of the smaller predecessor and recently named European Power Boat of the Year. The helm station features three 19-inch screens and as many cupholders in front of the helm seats. Above it, the largest T-top in this category is supported by sturdy pillars, which leave the walkaround more free and contribute to the boat’s stability by integrating into the railings. The exterior layout includes two galleys on each side, leaving space for a seating area with two adjustable tables that can seat up to 9 guests; alternatively, a U-shaped sofa with an electric table can be opted for. The cockpit provides a sunbathing area for 4 people and a garage for a tender or water toys. 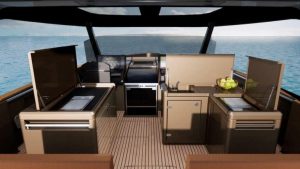 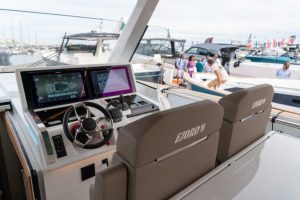 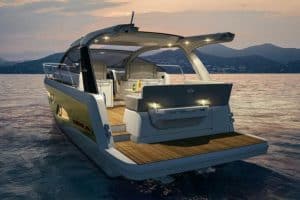 With the launch of this new model, the Hanse Group fills the ‘gap’ between the S335 and the S430, bringing to the market a middle way designed for more intelligent use of exterior and interior space. The S390 does not sacrifice room size, even though it is part of the sports line, and features the largest cockpit in its class. The hull has a V-shape and, again, numerous windows to encourage natural light. The helm station is protected by a canopy supported, again, by pillars that integrate into the bulwarks. Parallel to the stern platform, there is an L-shaped sofa and a small table.

Towards the stern, the canopy incorporates a bimini, two hatches or an electric sunroof that can be opened above the helm, and side windows allow fresh air and sunlight to enter. To port is the galley area with a refrigerator and two gas or electric cookers and an optional gas grill. On the starboard side, on the other hand, there is a sink and plenty of space for dishes and pots and pans. A barbecue can be positioned behind the seats and operated from the stern platform. Another possible option is a longer, hydraulically movable stern platform.

The master cabin, with its king-size bed, is lit from four directions thanks to the large windows. The L-shaped sofa in the saloon can be used as a bed to accommodate an extra guest if required. The guest cabin has two single beds.

The engines that the Hanse Group has planned for this model in the sports line are two Volvo Pena D4 Duodrops or, alternatively, the D6s, also Duodrops. The starting price is EUR 398,600.

Now the Hanse Group is preparing for the presentation of the Hanse 510 at the Barcelona Boat Show from 12 to 16 October 2022.