Following the previous year success, Groupe Beneteau joined the 45th Cannes Yachting Festival, renewing its appointment with the On the Horizon event on September 5 to announce the corporate vision, the new ambitions and projects and the latest product innovations.

Groupe Beneteau is specialized in 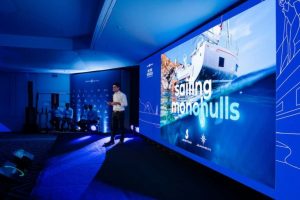 the production of sailing and motor-powered boats from 5.5 to 24 metres that are distributed over four strategic segments: dayboating, real estate on the water, monohull and multihull. Their brands are Beneteau, Jeanneau, Prestige, Delphia, Four Winns, Wellcraft, Scarab and Glastron.

“Nothing embodies real estate like a multihull and Prestige has decided to blaze a path into the world of catamarans – said Erik Stromberg – It is a natural step for a brand that has been focused on providing the best on board experience. From the luxury of space to the enhanced stability, the M48 perfectly completes the Prestige product offering. A true motor yacht, on a multihull platform.

Following the success of the X70, Prestige is also launching the new X60. The conference continued with Damien Jacob, Vice-President of Sailboat Development, presenting the new EXCESS 14 and LAGOON 51. In the monohull segment, the Jeanneau Yachts 55, the BENETEAU Oceanis 60 and, above all, the BENETEAU First 44, a historic line now celebrating its 45th anniversary, were presented. 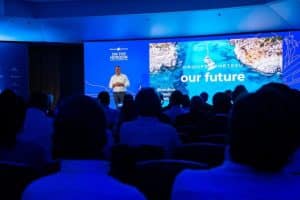 “On the product development side, we are currently focused on reducing the environmental impact in two key areas: composite materials and propulsion systems”.

For the launch of the First 44, a special team was formed to work together with French manufacturer Arkema to build a hull made exclusively of recycled resin. The same treatment will also be reserved for building two prototypes of the Mini 6.6 racing sailboat.

A further step was taken with regard to propulsion by collaborating with three companies: Vision Marine Technologies, Torqeedo and Volvo Penta.

We decided to change the way we produce our small composite parts and we introduced a new bio-sourced resin and natural fiber to replace the classic one. We also decided to look at the energy consumption at our plants. We have decided to collaborate with a local actor called Vendée Energie to install 4 hectares of photovoltaic shadehouse over all the parking lots at our production sites. – concluded Gianguido Girotti.

Last year Groupe Beneteau presented SEANAPPS. Today, 2,000 boats are equipped and sailing around the world, and by September 2023, every single boat leaving the plants worldwide will be also equipped with the app.  Moreover, it will be available also to every existing boat maintained in the Group’s dealers’ network.

“At Groupe Beneteau, digitalization in not just a department to look good and speak to the new generation. Digitalization transpires to every single entity to align on one goal: offer a unique 360° online & offline experience to every single one of our customers” explained Clement Douet, Vice-President for Digital Business.

Bruno Thivoyon, Groupe Beneteau CEO, concluded the press conference coming back on the key messages and on the ambitious and rational product roadmap.