The Vittorio Veneto intercepts a vessel in the North China Sea. A helicopter takes to the air to check: a fishing boat of about 150 metres is drifting in the waves. The helicopter approaches and spots, on board, a hundred or so exhausted bodies. They are Vietnamese, more than a hundred men, women and children.

They are the last wave of refugees who fled Vietnam following the fall of Saigon and the establishment of the communist regime in Hanoi. Farmers, teachers, office workers. Men. Rejected by neighbouring states, they try their luck clinging to soggy boats, tossed about by waves and at the mercy of gales and pirates. At 2 p.m. they are rescued and taken on board. They will join the other eight hundred Vietnamese refugees rescued from the fury of the sea by the Italian Navy. They will go down in history as the Boat People. 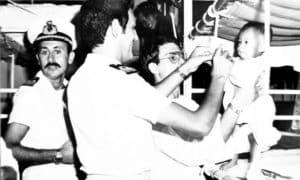 begins on 27 June of the same year when, late in the afternoon, an urgent cable reaches the cruiser Vittorio Veneto stationed in Toulon and the destroyer Andrea Doria stationed in Barcelona. They are to join the support ship Stromboli in Taranto and on 4 July set course for south-east Asia off Vietnam. The order is to save lives.

The decision for the Vietnam Mission is taken by President Sandro Pertini, who entrustes the task to the government headed by Giulio Andreotti. The ‘political’ leadership of the operation is entrusted to Defence Minister Attilio Ruffini.

The ships, after making major structural changes to the interior to accommodate nine hundred and sixty cots and numerous toilet facilities, and after reducing the crew to make room for refugees, arrive in Crete, pass through the Suez Canal, stop in Singapore and arrive in the mission area, the Gulf of Siam, on 26 July. They have travelled more than 8,000 miles.

The first report of a drifting boat loaded with Boat People is on 1 August, arriving from the Esso oil platform. The Vittorio Veneto spots the boat and lowers a lifeboat with a couple of sailors on board and a Vietnamese priest holding a megaphone in his hands: ‘The ships near you are from the Italian Navy and have come to help you. If you want you can board the ships as political refugees and be transported to Italy. Beware, the ships will take you to Italy, they cannot take you to other countries. If you do not want to embark, you can receive water, food and medical care immediately (…)”.

The rescue manoeuvres begin. The bodies of the Vietnamese, of whom only large desperate eyes remain, are rescued by the sailors and brought on board. 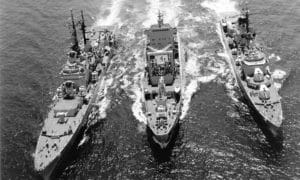 The Vittorio Veneto, the Andrea Doria and the Stromboli, after covering more than 2,600 miles patrolling the area, rescue 907 boat people including 127 children and 15 infants.

The three ships return to Italy, after a stop in Singapore, only on 21 August, after eighteen days of continuous navigation. On the Riva degli Schiavoni, Minister Ruffini, Minister Zamberletti and the entire city of Venice welcome the navy and the Vietnamese on board with applause.

A letter, written by a group of those Vietnamese, thanks Italy as follows: ‘[…] You Italians have a good heart, we were dead and thanks to your goodness we have returned to life, you are different from other peoples, for you there is a neighbour who suffers and for this cause you have sacrificed yourselves […]’.