How prepared are we for a fire on board? 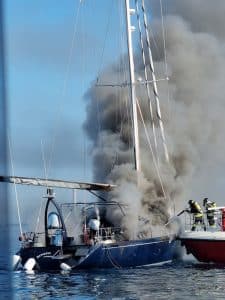 Fire on board is undoubtedly the most difficult situation to deal with.

Although it is the most feared, and above all the one with the most devastating effects, it is also the subject that seafarers know the least about, the one to which they devote very little time for training, and sometimes not even that.

In these few lines, we would like to deal with this topic in a comprehensive manner and provide the reader with points of interest and insight, because ‘nothing happens’, but if it does…

The phenomenon of the combustion reaction has been known for several millennia, but it was at the beginning of the 18th century that the theory of the ‘phlogiston’, a substance present in everything that can burn, was released, giving rise to heat. At the end of the 18th century, the chemist A.L. Lavoisier demonstrated experimentally that air is a mixture of oxygen and nitrogen and that combustion is an uncontrolled oxidation phenomenon in which oxygen acts as an oxidant while nitrogen does not take part in the reaction.

DEFINITION: Combustion is the chemical reaction of two substances (fuel and oxidiser) with the development of heat. Necessary conditions for this reaction

– presence of a heat source (ignition)

When one of the three elements of combustion is missing, combustion does not take place or if already taking place, it is extinguished.

This process is usually 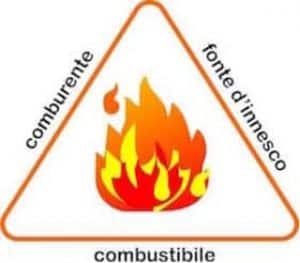 In academic terms, complete combustion (fire) is the result of the combination of four essential elements that must be present simultaneously:

– the fuel, which is the material capable of combining chemically with oxygen (or other substance) with the emission of thermal energy;

– the oxidiser, which is the substance that fuels combustion by oxidation of the fuel, i.e. oxygen.

– a source, which releases a suitable amount of thermal energy and which is capable of initiating the combustion process, e.g. a wooden match, or the flame of a candle.

The combination of physical and chemical transformations of a material subjected to the action of fire establishes the ‘fire reaction of materials’ (there are several combustion reactions). But what is a chemical reaction?

If we have a liquid fuel, it does not burn directly, but its vapours will burn when the ignition temperature is reached. So it is not so much the liquid that burns but the vapours it emits.

Even in the case of solid fuels (such as wood), it starts with the flammable gases emitted as the body heats up, and then later extends to the solid residue.

The extinguishing agents, which make up extinguishing systems, mobile or fixed, are many and varied, because the types of fire are different.

Here are some examples: 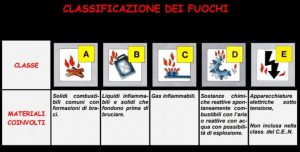 The comburent involved in combustion is oxygen, i.e. a ‘gas’.

For this reason, the other element involved, the fuel, must also be a gas or vapour, which explains why, in order for the combustion reaction to start, the solid fuel must be heated to the temperature at which it begins to emit combustible gases.

The more oxygen there is in the air (volumetric percentage ≥ 21%), the easier it is for the combustion process to start.

How to extinguish a fire on board?

The most common method of extinguishing a fire on board is the hand-held extinguisher.

But fire extinguishers are not all the same and differ in relation to extinguishing fire classes.

The most common types of extinguisher are:

Of these, the most commonly used types of extinguisher are certainly Powder and Water-Based.

This is the most widely sold extinguisher, the most affordable in price and the most common in small businesses. It extinguishes Class A, B and C fires. It consists of a steel casing pressurised with inert gas (nitrogen) or dehumidified air and composed of a chemical powder consisting mainly of salt compounds.

Also known as a CO2 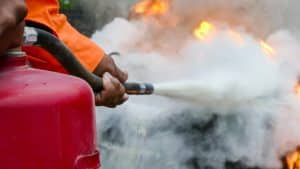 extinguisher, this is ideal for installation near electrical panels. It should be used together with, and not instead of, the Powder extinguisher because it covers Class B fires but not A and C fires because by its very nature it would lower the temperature but not extinguish embers.

The tank is in a single block of steel alloy (resistant to the high pressures developed by the gas) connected to a high-pressure hose and a PVC cone equipped with a handle, which prevents cold burns to the operator as the evaporation of the gas brings the temperature down to -79°C during use.

This consists of a corrosion-protected sheet steel cylinder with a charge composed of foaming liquid diluted in water. It is suitable for Class A, B and F fires, unsuitable for Class D fires. It is mainly used in the naval sector. When the extinguisher is operated, the foaming or water-based liquid (with other substances to amplify its effect) will come into contact with the air through small holes in the base of the lance. This contact will generate the foam.

How to use a fire extinguisher to extinguish a fire on board?

Anywhere, on a boat, at home or in the office, you should have a fire extinguisher at hand. This is one of the best ways to defend yourself against fires, especially since external intervention is not always immediate. However, not everyone knows the rules for handling a fire extinguisher or which extinguisher to use for a specific type of fire on board.

4. hold the hose in a horizontal direction.

It sounds easy, but in order to successfully extinguish a fire on board, a more in-depth knowledge of both the use of the extinguisher and the nature of fires and the extinguishing agent is required. 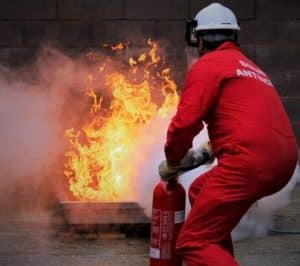 • Once the plastic seal has been broken, the fire extinguisher must be gripped firmly and decisively, perhaps taking a deep breath first and trying to remain calm despite the apparently difficult situation. It is advisable to direct the hose of the fire extinguisher with the main hand, so as to minimize the complexity of the operation.

Fire on board – Which fire extinguisher to use

A fire extinguisher is a first aid fire-fighting tool: proper use of a fire extinguisher can only occur in the presence of small outbreaks or the beginnings of a fire on board. However, the action of an extinguisher is essential to limit damage, to prevent the situation from worsening and, above all, to protect people’s safety. For this purpose, it is also necessary to be familiar with the various types of extinguishers and fires, thus understanding which one to use in different situations. For example, in the case of fires in electrical installations, which extinguisher should be used? Let us try to understand this.

How to extinguish a fire on board

Before looking at how to extinguish a fire on board, it is good to understand its evolution. A fire consists of four moments:
1. ignition phase;
2. propagation phase;
3. generalised fire;
4. extinguishing and cooling phase. 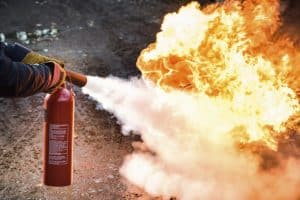 is the initial moment of the fire, during which the amount of flame and heat produced is still fairly limited. At this early stage, first aid means can be used to extinguish it, rather easily.

During the next phase, the propagation one, the combustion affects a larger area, with such heat and quantity of flames that it is impossible to approach without the appropriate equipment. In the generalised fire phase, there is spontaneous ignition of the materials present in the environment; there is a sharp rise in temperature and an exponential increase in the speed of combustion.

When the fire on board has finished affecting all combustible material, the extinguishing phase begins, characterised by lowering of temperatures and heat dissipation through smoke and heat conduction phenomena. To extinguish a fire, it is necessary to eliminate one of the sides of the fire triangle.

1.Fuel side, through the action of separation or distancing. Action is taken by removing combustible substances that have not yet ignited, thus proceeding by exhausting the fuel itself. This separation may take place by means of non-flammable shelters and barriers, strong jets of water or mechanical means.
2.Oxidiser side, by smothering. The fire needs oxygen to subsist; once this is removed, for example by means of a blanket, the fire is extinguished.
3.Ignition side: by subtracting heat, so as to obtain a lower temperature than that required for combustion. It is possible to act by lowering the temperature through, for example, water

It is not easy to extinguish a fire on board and all the operations listed are made even more difficult by the fear, worry and panic that grips any person, even the most experienced, who has to deal with this devastating element.

Let us also add, without fear of being contradicted, that very few people have taken a fire-fighting course, who have tried to use a fire extinguisher, who have done, or regularly do, extinguishing tests with a manual extinguisher. 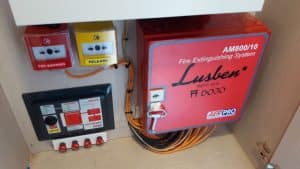 This is why it is important to have fixed, automatic extinguishing systems on board, placed in the most at-risk places on the boat, such as the electrical panels, the galley hood, the engine compartment, and the lithium batteries.

The most suitable and cost-effective extinguishing agent for these solutions, which allows even the smallest compartments to be protected, is potassium condensed salt aerosol.

AERPRO®, attending this year’s METS, Hall 5, booth 568, will present a new Secure4Sea (S4S) initiative, set up together with companies that have been working in the recreational, commercial and military boating industry in the security sector for many years.

S4S is the sole reference point for shipyards, captains, and private individuals for information and advice on everything related to safety on board, from fire extinguishers, life rafts, personal protective equipment to fire detection and extinguishing systems, aerosols, water mist, gas, etc.

Finally, boaters, boat builders and refit operators have a qualified reference to solve their safety needs in the best possible way.