An imposing, sleek yacht with sophisticated lines and first-class comfort: this is the new Benetti jewel

Presented at the MonacoYacht Show, the newly launched megayacht, the FB270 Triumph 65M, has just been delivered to its owner. A model with an unmistakable white colour, with soft, streamlined external lines created by yacht designer Giorgio Cassetta, completing the naval work designed by Benetti. The magnificent and elegant interiors, on the other hand, are by Benetti’s style office, which collaborated with the Green & Mingarelli Design studio taking care of all the fittings and furnishing details.

Six decks, an aluminium superstructure, a steel 65.40 metre long hull overall, a sauna, a fully equipped gym, a massage room, a Jacuzzi and a 70 square metre beach club, plus a folding platform for the helicopter, positioned at the bow.

Much more than just a boat, Triumph is synonymous with luxury, sophistication and comfort. From the layout and width of the spaces, the privacy guaranteed by the division of the guest areas from those of the crew, to many other details that make a difference… this is the Benetti Triumph 65M. 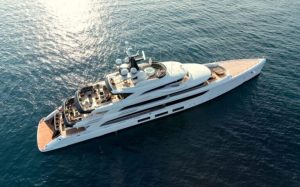 Let’s take a closer look at this majestic model.

Starting from the bottom, the Lower Deck offers a comfortable space of about 70 square metres, providing immediate access to the sea. Amidships, the sleeping area consists of 4 cabins that can accommodate up to 8 guests, with all the comfort and privacy possible because they are separated from the cabins and areas in the bow, exclusively reserved for the crew.

The Main Deck has a well-protected cockpit, where there are comfortable sofas and tables to enjoy convivial moments on board in maximum comfort. A large saloon has been created amidships, dominated by large windows and modern LEDs on the ceiling, offering a minimal and elegant living/relaxing area for all guests.

Moreover, on the Main Deck Benetti’s designers have reserved a VIP cabin for a special couple of guests that offers a wide sea view.

The Upper Deck, on the other hand, is entirely reserved for the owner, a true custom flat that dominates the entire yacht. The owner’s cabin alone occupies a space of 130 square metres, the Sky Lounge is perfectly consistent with the fittings throughout the yacht and enjoys ample space, with an incredible sea view. 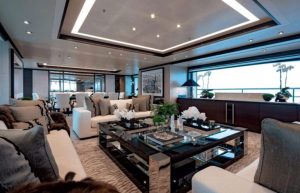 the Sun Deck is surprising, equipped with a Jacuzzi, sunbathing seats and a table that can seat up to ten people and which, thanks to the wind barriers, can also be used while underway.

The Benetti Triumph is therefore a majestic but sleek custom yacht that conceals the essence of the company behind it: elegance, refined design but above all convenience, usability and comfort for the owner and his guests. The shipyard’s vision has always dominated the creation of these yachts; they are perfectly balanced between large volumes and large windows that open up the rooms, make them bright and almost make you forget you are on a ship.

The classic of the future has arrived, been built and delivered. Made to stand the test of time while maintaining its charm and functionality, it is a classic masterpiece in true Benetti style.

Benetti Yachts evolves the B.Century family and launches the innovative 85M “Project ORO”. Several collaborations with established international naval design and architecture studios are planned. The calendar of the launches is complete, as are the deliveries of the new models.

The evolution of Benetti Yachts, new B.Now and B.Century designs

At the 31st Monaco Yacht Show, Benetti Yachts presented its future strategy, based on tradition, innovation and engineering, thanks also to collaboration with international naval design and architecture studios.

The investments made over the last few years are bearing fruit, as Marco Valle, CEO of the Azimut|Benetti Group, confirms: “Almost a month after the start of the new yachting season, a record-breaking 23 launches are planned, almost two a month. The prospects for the future are very positive: we began in September with the launch of a 50m B. Now and will conclude in August with the launch of a 68m B.Century. The order backlog is trending upwards, with new model deliveries planned until 2027”.

The B.Now and B.Century families available with traditional, hybrid or diesel electric propulsion. Azimut|Benetti has been committed to the development of different types of propulsion for more than 10 years, supporting the reduction of environmental impact, for an increasingly sustainable boating industry.

B.Now, spaces connected with the sea 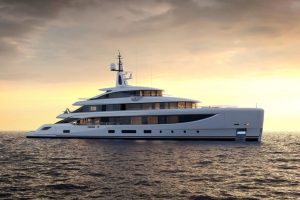 The Monaco Yacht Show was the occasion for the world premiere of the Irynna B.Now 50M, a motor yacht presented by Sebastiano Fanizza, Benetti’s Chief Commercial Officer, together with the B.Now 60M and the new B.Now 67M OASIS.

These new models join the family composed of the 50, 60, 67 and 72M and have become one of Benetti‘s bestsellers, thanks to the 20 units already sold.

Sinot Yacht Architecture & Design, through the testimony of Paul Costerus, Senior Yacht Designer & https://www.benettiyachts.it/Project Manager, traced the lines of the interiors that distinguish the B.Now 67M Oasis in concept and size.

Interiors and exteriors have a continuity, highlighted by the sliding windows on the main deck and the large windows.

The construction process of the new B.Now 60M was described by Andrew Collett, RWD Project Manager. The lines enhance the Oasis Deck solution by favouring the use of natural light and a continuity with the sea. The interior and exterior spaces can be redefined into new hospitality destinations, according to the needs of the owner and his guests, for a dynamic and informal, yet elegant and refined life on board. 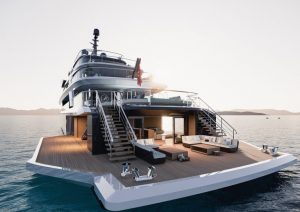 to the B.Century family, developed in cooperation with Cassetta Yacht Designers, were presented by Sebastiano Fanizza.

Created in the wake of the success of the multi-award-winning Triumph (65 m) – premiered at the Monaco Yacht Show – Metis (63 m), Zazou (65 m) and Calex (67 m), the B. Century family includes five custom yachts designed from an engineered platform. Century family includes custom yachts built from an engineered platform that has been enriched with no less than five models designed to offer unique solutions, distinguished by their distinctive aesthetics: two 55-metre designs, one with a generous Sun Deck open on all sides, and the other with the Upper Deck transformed into an Owner Deck with a bow master suite and private terrace.

A 62-metre yacht with unbeatable content, a rational and elegant 68-metre yacht and a 75-metre yacht that introduces new layout concepts, such as the unprecedented Pool Club and Sea Club solution conceived on two different levels. Each yacht is unique in terms of stylistic innovation, layout and on-board concept. “A distinctive feature is the formal cleanliness of the continuous signs that describe the yachts’ shapes, the flow of lines runs uninterrupted describing volumes that unmistakably express Benetti’s stylistic identity“.

‘Project ORO’ is a design dedicated to yachts over 80 metres, using the most modern propulsion technology and minimizing dimensional impact.
“During the development of “Project ORO,” says Giorgio M. Cassetta, “we wanted to seize the opportunity to express numerous innovative concepts, aspiring to bring them together in a unique yacht. By developing a language of style featuring great visual purity and strong characterization of the main masses, and by renouncing the criteria of civil architecture in favour of a freer and more fluid approach, we have tried to propel the project into an attainable future. We hope the bold content recognises a series of desires that customers in this size range frequently express and are unlikely to have found fulfilled by the boats they have looked at so far”. 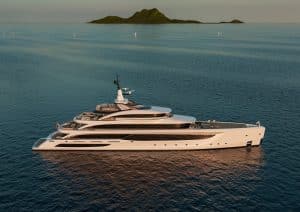