Italy will be a protagonist at the forthcoming Fort Lauderdale International Boat Show to be held in Florida between October 26 and 30 also thanks to the Naples-based Cantieri Gagliotta which will be playing a sort of ‘away game’, proposing its Lobster 35 to the American public. 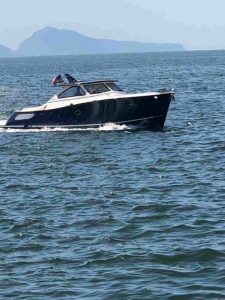 I call it that because it is well known that the Lobster is a boat that exudes the United States from all its mouths, and whose history is doubly connected with the lobster fishing that used to be, and still is, practised in Maine: it is no coincidence that the name Lobster is linked precisely to the fishing of the world’s most famous crustacean, which in the North of the United States dates back to the times of the Native Americans.

“ We are exhibiting Lobster 35 for the first time in the United States. – says Cantieri Gagliotta’s Sales Manager Claudio Gagliotta – We will play a game away from home, it is true, but with all the strength of our made in Italy”.

Gagliotta’s love for American-style boats began a long time ago: “We have been producing boats for 70 years” continues Claudio Gagliotta, “and we started out as racing boats, strictly offshore, but gradually we wanted to maintain the characteristics of ‘seagoing’ boats, and as times evolved, classic motorboats were becoming fewer year after year, so we had to find alternative boats that could convey our values and our passion. We currently have two lines, the Lobster, which is sweetly elegant, classic, and the Fisherman, which I like to describe as more sporty”

Gagliotta is the last yard 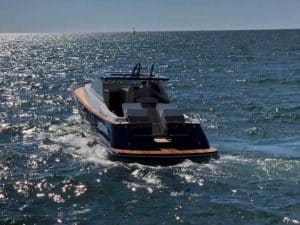 left in Italy to produce the Lobster, and this is one of the reasons why its fame is now known overseas to all enthusiasts of this boat type, which had its boom in the mid-19th century, precisely as a work boat, and then exploded as a recreational boat around the 1950s thanks to its technical features that made it safe and reliable, but at the same time graceful at sea.

This evolution led the boats to be more and more sought-after, especially in their interiors: from work boats they were transforming into recreational boats and this is where Cantieri Gagliotta found their place, combining the practical American style with all the quality of Made in Italy.

“We have several friends and customers in the USA“, Claudio Gagliotta says – “Some come to visit us at the yard, like a couple who bought an old used Gagliotta here in Italy, very different from the current model, with an enclosed stern. They fell so in love with it that they completely refurbished it and then contacted us to show us their work before visiting us on site“. 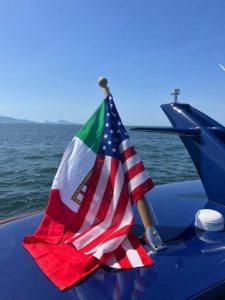 In short, if the past of Gagliotta and the Lobster is full of exciting tales of work, research and evolution, it’s only natural that the future brings with it great prospects, and I don’t use the word ‘great’ at random: “This season we’ll be launching the Lobster 53” concludes Cantieri Gagliotta’s Sales Manager, “like our Lobster 35, but practically twice as big in all. 53 feet, three cabins and two engines for up to 700 HP. A great novelty that we’ll tell you about step by step, along with other surprises that I can’t reveal yet”.

So, for now, all that remains is for the Fort Lauderdale International Boat Show to enjoy the spectacle associated with this exciting show where, among so many titans of the boating world, you will find this all-Italian jewel that we are sure will attract many eyes with its unmistakable style.