Fabiani Yacht: the most innovative elements on display on models

At the Cannes Yachting Festival we had the opportunity to chat with engineer Maurizio Fabiani, who explained some of the details that make his yachts truly unique in our opinion. From the engineer’s pencil came two lines of superyachts that differ in the type of propulsion, classic and hybrid, which in turn are available in 70, 77, 100 and 101 lengths. On display at Fabiani’s booth at the Palais des Festivales were models, all extremely well made, which managed to attract the attention of many visitors, most of whom were stunned by such a futuristic project. 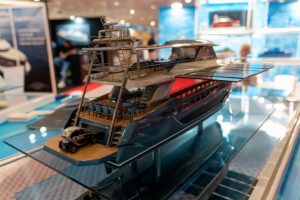 In all models, the stern platform also serves as a gangway, and it can be raised up to the flybridge or lowered up to one metre underwater thanks to a patented rail system, facilitating operations such as launching and hauling a tender.

Even, as seen from the scale model, it is possible to park a small electric car in the garage, aligning the platform to the dock.

We were really amazed by the Fabiani Yacht Hybrid 101′ with its majestic structural sail: it is a surface covered in solar panels that can also propel the yacht with the force of the wind, assisting in electric navigation and reducing consumption. 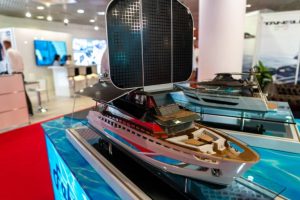 engineer Fabiani has already demonstrated through numerous calculations the safety and rigidity of such a rigid structure that can withstand wind gusts of 100 km/h.

Anyway, the boat is equipped with an alarm system that automatically closes the structural sail and the other solar panels if needed.

We were delighted to hear that work on the Wedgeline Hybrid 77, whose keel was laid in April, is progressing smoothly, and that we will be able to see the first hull in the water in about a year and a half. Honestly, we are looking forward to it.